Federica Lo Pinto was born in Trieste in 1997, and graduated from the Koper Art High School with a degree in accordion with prof. Erika Udovič Kovačič. In 2015, she was admitted to the Ljubljana Academy of Music, where in 2018 she graduated in composition and music theory under the mentorship of the composer and clarinetist Prof. Uroš Rojko. He is currently pursuing his studies with the same professor at the second-level (master's) degree program. She has perfected her solo singing skills with Prof. Tanja Grlica and one year with Prof. Andrej Makor at the Koper School of Music. For many years she has been a member of various choirs with which she regularly participates in national and international competitions. From 2014 to 2016 she was the assistant conductor of the vocal group Vocal Drops. Since October 2017 she is the conductor of the Children's Choir Vesela pesem. Since 2016, Federica has written several vocal, instrumental and vocal-instrumental works, with which she successfully presents herself in Slovenia and abroad.

In 2016, her composition for the women's choir ''Dihanje / Breathing'' was performed at the International Biennale of Contemporary Music in Koper. The Dissonance String Quartet performed the song ''L'Aldilà'' in 2017 at the Ljubljana Casino Hall and at the Zagreb Academy of Music. In December 2018, at the International Biennale of Contemporary Music in Koper, the Girls Choir of the Koper School of Music performed the song ''Il Richiamo'', for women's choir and chamber instrumental ensemble. In the same year, Federica wrote the music for the mini opera "Uspavanka v sobi brez oken / A Lullaby in a Windowless Room", which was premiered in January 2019 in Budapest (Hungary) at the Lizst Academy. In the following months, the mini-opera was also repeated in Brno (Czech Republic) and in Kino Šiška in Ljubljana. In March 2019, at the concert of the RTV Slovenia Symphony Orchestra, her composition ''Confusione'', written specifically for this event, was performed at Slovenian Music Days. In the same year, Federica wrote the composition "Solution?" for chamber band and four solo sopranos, performed at the Kazina Great Hall in Ljubljana. In July 2019, Federica submitted the song ''Skrinja / Chest'' for a composing competition organized by MePZ Obala Koper and ranked 2nd. During this year, she wrote music for the children's musical "Zvezde pomladi / Stars of Spring", which was staged five times at various places after the May premiere at Opčine, Italy. 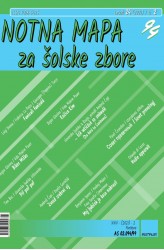