Zbor svetega Nikolaja Litija (The Saint Nicholas Choir Litija, Slovenia) consists of over 45 young singers connected by the power and sincerity of spiritual music. Since its foundation the choir has evolved into the finest vocal group and become renowned in Slovenia and abroad by performing on Slovene grand stages, participating at services at the local church and regularly touring abroad - in Austria (2001, 2006, 2007), Italy (2004, 2005, 2011), Croatia (2006), France (2007), Switzerland (2008), Belgium (2013) and Ireland (2015).

The Zbor sv. Nikolaja Choir is under the patronage of Nova Kultura Litija cultural organisation and is a member of the European choir union Europa Cantat. From its foundation in 1997 it has been led by Helena Fojkar Zupančič with the help of Janez Klobčar. 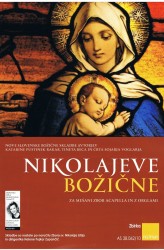