ŽUPANČIČ Oton (January 23, 1878 – June 11, 1949) was a Slovene poet, translator, and playwright. He is regarded, alongside Ivan Cankar, Dragotin Kette and Josip Murn, as the beginner of modernism in Slovene literature. In the period following World War I, Župančič was frequently regarded as the greatest Slovenian poet after Prešeren, but in the last forty years his influence has been declining and his poetry has lost much of its initial appeal.

He was born as Oton Zupančič in the village of Vinica in the Slovene region of White Carniola (Bela Krajina) near the border with Croatia. His father Franc Zupančič was a wealthy village merchant, his mother Ana Malić was of Croatian origin. He attended high school in Novo Mesto and in Ljubljana. In the Carniolan capital, he initially frequented the circle of Catholic intellectuals around the social activist, author and politician Janez Evangelist Krek, but later turned to the freethinking circle of young Slovene modernist artists, among whom were Ivan Cankar, Dragotin Kette and Josip Murn. In 1896, he went to study history and geography at the University of Vienna. He stayed in Vienna until 1900, but never completed his studies. In the Austrian capital, he became acquainted with the contemporary currents in European art, especially the Viennese Secession and fin de siècle literature. He also met with Ruthenian students from eastern Galicia who introduced him to Ukrainian folk poetry, which had an important influence on Župančič's future poetic development.

In 1900, he returned to Ljubljana, where he taught as a substitute teacher at the Ljubljana Classical Gymnasium. He started to publish his poetry in the liberal literary magazine Ljubljanski zvon, where he clashed with one of its editors and the most influential Slovene author of that time, Anton Aškerc. In 1905, he traveled to Paris and settled in Germany, where he worked as a private tutor until 1910. In 1910, he returned to Ljubljana and worked as a stage director at the Drama Theater of Ljubljana. In 1912, the national liberal mayor of Ljubljana Ivan Tavčar employed him as the director of the City Archive, a post previously occupied by Župančič's former opponent, Anton Aškerc. The following year, 1913, he married Ana Kessler (Ana Župančič), daughter of the socialite Marija Kessler and sister of the poet Vera Albreht, who was married to the author Fran Albreht. In 1920, he returned to his previous job as a stage director and later manager of the Drama Theater.

During the Italian Fascist and Nazi German partition and annexation of Slovenia in World War II, Župančič sympathized with the Liberation Front of the Slovenian People and wrote poems under different pseudonyms for underground communist journals. After the end of the war in 1945, he was given several honorary positions and awards by the new communist regime. During that period, he was dubbed "the people's poet." He died in Ljubljana on 11 June 1949 and was buried with full honours in Žale Cemetery on 14 June, in the same grave as his friends from childhood Ivan Cankar, Dragotin Kette, and Josip Murn.

Župančič published his first collection of poems in 1899 under the title Čaša opojnosti (The Goblet of Inebriation). The collection, published at the same time and by the same publisher as Cankar's controversial book Erotika (Eroticism), was a compendium of poems from Župančič's earlier periods, when he was strongly influenced by the decadent movement. The two books marked the beginning of modernism in Slovenian literature and caused a controversy. All issues of Cankar's Erotika were bought by the Ljubljana Bishop Anton Bonaventura Jeglič and destroyed, and Župančič's Čaša opojnosti was condemned by the most renowned Slovene conservative thinker of the time, the neo-thomist philosopher Aleš Ušeničnik.

Župančič's later poems showed little influence of decadentism, but remained close to a vitalist and pantheist vision of the world and nature. He gradually turned from pure subjective issues to social, national, and political concerns. Already in 1900, he published the highly influential poem Pesem mladine (The Song of Youth), on the occasion of the centenary of Prešeren's birth, written as a battle song of his generation. In his masterpiece Duma from 1908, the visions of an idyllic rural life and natural beauty are mixed with implicit images of social unrest, emigration, impoverishment, and economic decay of the contemporary agricultural society. The poems Kovaška (The Blacksmith's Song, 1910) and Žebljarska (The Nail Maker's Song, 1912) are a powerful lyrical glorification of the vital and moral strength of oppressed manual workers.

The poetry collection that Župančič is best known for is the book of children's poetry Ciciban, published in 1915.

Župančič also wrote two plays, Noč za verne duše (A Night for Faithful Souls, 1904) and Veronika Deseniška (Veronika of Desenice, 1924), which were staged during the time when he headed the Drama Theater in Ljubljana. 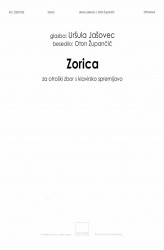 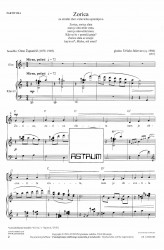