VENOSA, Carlo Gesualdo da (ca.  8 March 1566 – 8 September 1613)  - was Prince of Venosa and Count of Conza and as a composer known for writing madrigals and pieces of sacred music that use a chromatic language not heard again until the late 19th century. Carlo was born the second son of the Second Prince of Venosa, probably in the town that bears his family's name – in the principality of Venosa in what is now the Province of Potenza, Southern Italy. Carlo's father was prince of Venosa, and his mother was the niece of then-current pope Pius IV and the sister of Cardinal Borromo.

After receiving musical training from Stefano Felis and Giovanni de Macque, Carlo publishes his first motet, Delicta nostra ne reminiscaris, Domine, in 1585, when he was 19. That same year, his elder brother Luigi Gesualdo dies at 20, making Carlo the heir and making marriage an imperative for him. The bride was his first cousin, Maria d'Avalos, at age 25 already twice-widowed. They wed in Naples in 1586, and the following year an heir was born. Later Gesualdo discovered his wife Maria in an affair with the Duke of Andria, and on October 17, 1590, Gesualdo, assisted by three servants, killed them both. The incident attracted public outrage, but there would be no trial, as authorities from both Church and State convened to dispose of the matter. Gesualdo's father died in 1591, and another marriage was arranged to Donna Leonora d'Este, taking place in Ferrara in February, 1594. In Ferrara, Gesualdo came into contact with court composer Luzzascho Luzzaschi and his "secret music," and became a close friend of the poet Torquato Tasso. Upon returning to his estate late in 1596, Gesualdo resolved to travel no more. In 1597, d'Este bore Gesualdo a second son who died in 1600, an event that plunged the Prince into a deep despair. In 1600, a secret political document says about him: «he is opposed to innovation, attends to money-making and does not delight in anything but music». Gesualdo and d'Este separated in 1608, and in 1610 d'Este began divorce proceedings against Gesualdo, but changed her mind and returned. In 1611 Gesualdo acquires his own palace printer, Giovanni Giacomo Carlino, who prints his latest works. In 1613, Gesualdo's elder son died, and Gesualdo himself followed on September 8 at age 47. He was known to be violently asthmatic his whole life. In later years, he would pursue masochistic practices which chronically served to weaken him physically, his spirit already broken by a decade of insanity.

Gesualdo's six books of Madrigals constitute the main body of his work. Books I and II (1594) are rooted in standard practice, but when compared to contemporary settings of the same poetry, they reveal a stubbornly individual mind at work. Book III (1595) shows a decreased reliance on pre-existing settings, and by Book IV (1596), all the texts used are original. Here, Gesualdo's mature style begins to emerge. Books V and VI did not appear until 1611, but in these editions, Gesualdo states the madrigals were written "15 years" prior to the date of publication, and were printed only to protect the works from plagiarists. While essentially diatonic in character, madrigals such as Beltà, poi che t'assenti and Moro lasso contain music which modulates so frequently it results in a disoriented sense of key. Dissonance is used liberally; passing tones cross relate, and there are passages of stepwise chromatic motion resulting in a suspended tonality. Gesualdo published three books of sacred music. The first two, entitled Sacre Cantiones, appeared in 1603, and in the second book Gesualdo expanded his usual five-part texture into six and seven parts, though two of the partbooks are lost. The third book, publication of Responsoria et alia ad Officium Hebdomadae Sanctae spectantia (1611), represents Gesualdo's final musical statement. It is entirely in his late style, and the responses composed for the Good Friday service contains some of the most assured and eloquent music that Gesualdo composed.

Gesualdo's strength was his ability to combine a variety of unconventional strategies into the service of a deeply felt and psychologically effective whole. Gesualdo's style, once regarded as unique, has helped to open up an entire field of study relating to the avant-garde of the late sixteenth century, sometimes referred to by scholars as the "Mannerist Revolution." This movement vanished once Baroque style came to the forefront of music in Italy.

Between 1957–1967 the Gesualdo’s Sämtliche werke (Complete works), edited by Wilhelm Weismann and Glenn Watkins, was published by Breitkopf & Härtel.

Werner Herzog’s film Tod für fünf Stimmen (Death for Five Voices) is released in 1995. The film explores the music of Carlo Gesualdo and the legends surrounding Gesualdo's personality, his cursed castle, and his murder of his wife and her lover.

In May, 1995, the opera Gesualdo, composed by Alfred Schnittke and written by Richard Bletschacher, is conducted by Mstislav Rostropovich at the Vienna State Opera. 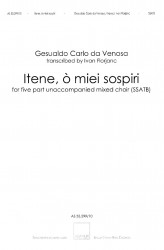 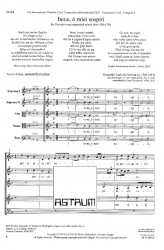