FERJANČIČ Fran (1867–1943), born in Goče, Vipava, was a Slovenian Roman Catholic priest and composer. After graduating from high school in Gorizia (now Italy), where he was taught singing by composer Angelik Hribar, he studied theology in Ljubljana (Slovenia), and studied music with composer Anton Foerster, and was ordained a priest in 1890. He then served as a chaplain in Ilirska Bistrica, in Trnovo (Ljubljana) and at St. Jacob Church in Ljubljana, at the seminary in Ljubljana (until 1917), as pastor in Mavčiče, and in 1919 became canon (priest) in Novo mesto.

He learned most of the music, both practical and theoretical, on his own, and he also learned a lot along his friendship with composer Stanko Premrl. He went to the Benedictines in Sekovo (Abtei Seckau, Styria) to study traditional gregorian chant, and was educated about old polyphonic compositions in Regensburg, Germany.

Already as a chaplain at St. Jacob Church in Ljubljana (Slovenia), he took singing lessons at the seminary (until 1917) and at the same time taught liturgical and ecclesiastical history at the Organ School, gregorian chant and for some time also figurative singing. He participated in the Cecilian Society as a councilor, was a member of the Church-Music Commission for the Diocese of Ljubljana and in 1917 became a Prince-bishop (of Ljubljana) spiritual councilor.

Ferjančič is also the author of the composition Pozdrav, whose refrain “Oj slavljenec današnji, pozdravljen tisočkrat! / Oh, today's celebrator, a thousand times greeted!” replaces the foreign, globally-acclaimed song “Happy Birthday to You” in some Slovenian regions. 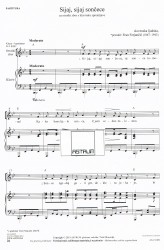