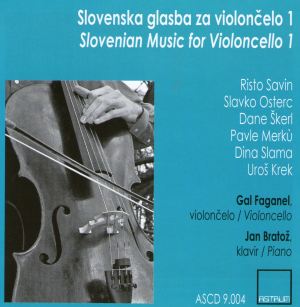 With this disc to review I can’t help opening with British comedy icons Monty Python’s famous phrase “and now for something completely different”. Slovenian music for cello and piano and solo cello and what a discovery! To say that I know nothing about music from Slovenia is not to overstate the case. That’s one of the many joys of reviewing: the learning curve is never ending.

The first surprise is that the composer of the first piece on the disc is by someone who literally led a double life. Risto Savin, composer, was born Friderik Širca and was a General in the army! As a composer he is credited with creating a Slovenian national tradition of opera. In his Sonata for Violoncello and Piano, op.22, written in 1922, each instrument is given an equal role. I imagine it is quite tricky to play as the cello is predominantly in the lower register whilst the piano is well above. The opening movement’s main theme is beautifully rich and, though the work was written in the 1920s it has much more in keeping with one written in the late 19th century. The first impression is that you are listening to a piece by Brahms or Mendelssohn. In common with Brahms there is much reference to the folk heritage of the region and it is impossible not to know that we are in ‘central Europe’. The second short movement has a lovely opening theme too as does the third. The whole work brims with ideas, all of them thoroughly explored and exploited. It is a piece that is highly enjoyable with lush melodies and I imagine one would never tire of hearing it.

Though written a mere seven years after Savin’s work Slavko Osterc’s Partita for Violoncello and Piano is a world away in style with its roots firmly in the 20th century. Osterc’s teachers included Emerik Beran, a pupil of Leoš Janáček as well as Vítězslav Novák and  Alois Hába. The work begins with spiky rhythms introduced on the piano before the cello joins in to share them. The second movement begins much more calmly with a melancholy theme on the cello which then becomes agitated. The piano part mirrors the mood before calm is restored. A short Interlude comes next in which the piano has the role to itself, the cello taking no part at all. The final Fugue has both instruments with an equal share of the material. It completes a work that is a perfect example of the kind of modernist experimentation that was prevalent in the interwar years.

Two short works by Dane Škerl follow, the first, Two meditations for Violoncello and Piano was composed in 1989. It can be considered an example of Slovenian avant-garde and though stark in nature it is attractively melodious. His Three Intermezzos for Violoncello Solo which dates from 1987 is also spare but beautiful, exploiting the full range of the cello’s register from its very lowest voice to its topmost notes across three short movements. Pavle Merkù’s short Madrigal for Violoncello Solo from 1985 is again avant-garde but as he himself put it so eloquently “In contemporary music I search - just like my predecessors did in the past - for directness, experience and originality. What we termed ‘contemporary music’ or ‘avant-garde’ (or call it by any other name you like!) is in actual fact the expression of our times. Just like all past periods, the present yields weeds, degenerated crops and all kinds of speculation. However, it also produces many great and true works of art. The development of contemporary music can bestow on us absolutely nothing new under the Sun”. Indeed, and I thought of that especially when 2½ minutes in comes a little tune that reminded me immediately of “Cherry Ripe”.

Dina Slama is the only Slovene woman composer represented here. Her Song for Violoncello written in 1994 is another beautifully simple piece that fully exploits the cello’s wonderfully expressive eloquence. The final work on this fascinating disc brings the piano back for Uroš Krek’s Sonata for Violoncello and Piano, a substantial three movement work dating from 1984. This is full of long flowing lines and a particularly attractive tune in the second movement.

This disc is entitled Slovenian Music for Violoncello 1, implying that there will be further releases of this repertoire which will be worth hearing if this one is anything to go by. It is a credit to a small country like Slovenia with a population of little over two million that it has produced as many composers as it has. The music is really interesting and memorable. There are so many works as yet undiscovered and it is wonderful to have the opportunity to hear them. This disc was a revelation to me and will be to any music-lover. The two soloists play the works with passion, commitment and skill and they have been well recorded.