Both parents (Katherina Orehovnik and Philipp Wolf) had Slovenian ancestors. Simultaneously with the expansion of the leather craft and the ascent on the social ladder, they experienced the then normal process of Germanization. Wolf, family name - found it easier to establish themselves in the predominantly German market town with the surname Wolf. He had 3 sisters and 2 brothers.

In fact, he only had elementary school done. From his father, who was a passionate musician, Hugo learned to play the violin and piano. He dropped out of school in Maribor (Slovenia) after two years. After an unfortunate schooling in Graz and the monastery gymnasium of St. Paul in the Labot valley, it turned out that he had no other abilities than music, so in 1875 he went to the Vienna Conservatory, where his classmate was Gustav Mahler. He seems to have learned very little and was expelled in 1877 for a disciplinary offense. From the age of seventeen onwards, he was dependent on himself for his music education. He moved to Slovenj Gradec again, where in the summer of 1877 the first cycle of choral songs and solo songs (Wanderlied) took place. In November 1877 he returned to Vienna, where at the age of eighteen he contracted a syphilis infection, which marked his life and work until his death in 1903. With piano lessons and financial support of his father, he lived in Vienna for many years. In 1881 he took a job as an assistant conductor at the Salzburg City Theater / Salzburger Stadttheater, Austria, but resigned after three months and was never hired as a musician again.

In 1884, Wolf became a music critic at the tabloid newspaper Wiener Salonblatt, where he was an ardent admirer of Wagner and criticized Brahms. In 1887 he published twelve of his poems, resigned his position at the newspaper, and devoted himself to composing. For the next nine years, his fame as a composer was at its peak. It was a hundred years of intense creation and a period of mental and physical exhaustion when there were times when he couldn’t listen to music.

Wolf suffered from extreme poverty until his death, which was a heavy burden for him due to his poor health and pride, sensitive and nervous temperament. The income came almost exclusively from the persistent efforts of a small group of friends, music critics and singers who performed his songs, the support of the Viennese academic society Wagner and the founding of the Hugo Wolf Association in 1897 with Michael Haberlandt in Vienna.

In September 1897 he had to be hospitalized because of syphilis. On January 24, 1898, he was healed and he left the sanatorium. Wolf spent the summer of the same year in the Adriatic and then in Traunkirchen in Upper Austria. After a suicide attempt at Traunsee, he was admitted to the best ward of the Lower Austrian State Mental Hospital in Vienna, Austria, where he died on February 22, 1903, after four years of suffering. His grave is in Vienna's Central Cemetery (Group 32 A, No. 10).

In 1888 he created the first of the immortal solo songs with the lyrics by Eduard Friedrich Mörike, and in that year he set to music as many as forty-three. This was followed by several concert evenings with his solo songs. In 1889, the first songs from the monumental Goethe cycle were written, as well as by Nikolaus Lenau, Heinrich Heine and Joseph von Eichendorff. In 1890 he traveled several times to Germany, where he made a circle of important acquaintances (eg Ludwig Strecker, head of the important publishing house Schott, which published songbooks that allow Wolf to penetrate the general music public. Then the Corregidor, after Alarcon's Spanish short story, is published in 1895. Wolf wrote about 300 compositions, and was not properly received by the audience until 1902-1906 (posthumously).

Some of his most important (choral) works are:

Der Corregidor - an opera in four acts, was successfully premiered in 1896 in Mannheim 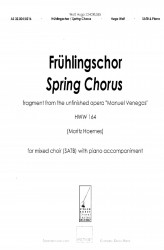 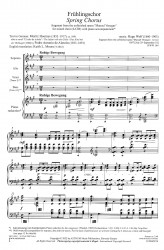