MOZART Wolfgang Amadeus (January 27, 1756 - December 05, 1791) was born in Salzburg, Austria, where his father Leopold was a violinist and composer. Wolfgang (or Wolferl, as his family called him) was a child prodigy. He composed his first piece of music at age five; he had his first piece published when he was seven; and he wrote his first opera when he was twelve. By the time Wolfgang was 6, he was an excellent pianist and violinist. He and his sister Maria Anna (known as Nannerl) traveled all over Europe performing for royalty. At 17, Mozart was engaged as a musician at the Salzburg court but grew restless and travelled in search of a better position. While visiting Vienna in 1781, he was dismissed from his Salzburg position. He chose to stay in Vienna, where he achieved fame but little financial security while trying to earn a living as a pianist and composer. But he had a lot of trouble handling the fact that he was no longer a child prodigy.

Mozart composed more than 600 works, many of which are acknowledged as pinnacles of symphonic, concertante, chamber, operatic, and choral music. He is considered among the greatest classical composers of all time, and his influence on Western music is profound. 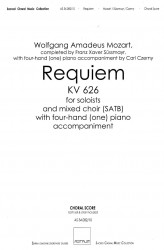